Gaudencio Thiago de Mello is a caboclo* who was born and grew up in the Brazilian Amazon rain forest. Besides listening to the hymns and spirituals brought by missionaries, and hearing his sister and brother playing classic pieces on the the piano and violin, Thiago’s musical awareness was informed by the whistling wind, the roar of rivers, and delicate bird songs - elements he incorporates in his percussion and composition.

After pursuing studies in architecture, Thiago led a successful career as a professional soccer coach in Brazil (twice Brazilian champion with Botafogo) and Colombia (Deportivo Cali and Unión Magdalena), and at the age of 33 moved to New York City to fulfill his lifetime dream of studying music. He learned from many musicians, including Richard Kimball , Llew Matthews, Dom Salvador, Maurício Smith, Haroldo Mauro Jr. and Gil Evans. He studied classical guitar and founded the Guitar Society at the United Nations in 1970, which he directed for 10 years. He also founded and directed the Jazz Ensemble at the Rudolf Steiner School in New York City, where he taught for 29 years.

Thiago’s compositions preserve the natural sounds and rhythms unique to Afro-Brazilian roots and Amazonian Indian chants, sometimes blending them with an urban jazz idiom. He has experimented with a variety of styles, combining the timeless, primitive musical elements of the Amazonian jungle, and the contemporary jazz language of New York City. He has created a special collection of instruments called“Organic Percussion” which he uses in concerts, recordings and in master classes around the world.

His first album, (1973) "The Music of Thiago", produced by George Klabin, Sound Ideas Studio, in New York, has just been reissued in a new format under the title "Thiago de Mello  AMAZON", by producer Arnaldo DeSouteiro, (JSR) and released in Spain by the Blue Moon label and also in Japan, by Bomba Records. It was also chosen the CD of the month of March, 2000, by the music magazine STRAIGHT NO CHASER of England and voted the 2nd Best CD of the Year-1999 by the DOWN BEAT Jazz Magazine in the category Re-Issue, behind Bob Dylan. Thiago was voted among the 10 best percussionists in the US by the same magazine, in 2000.

Thiago appears as composer, performer and arranger on Sharon Isbin’s Grammy nominated "Journey To The Amazon" with saxophonist Paul Winter, and her "Love Songs & Lullabies" with soprano Benita Valente (NBC chose two of his works from this CD for broadcast during the 1992 Olympic Summer Games in Barcelona). He also appears on Luiz Bonfá’s "Magic" and Carlos Barbosa-Lima’s "Chants For The Chief" and "Ginastera", with whom he recorded live three of his pieces Amor Sem Fim, (arranged by Richard Kimball), Reflections and Chant For The Forgotten Ones (arranged by Daniel Wolff), with the Wren Orchestra of London, at the St. John's Smith Square, England.

His compositions are featured as well on Ms. Isbin’s Grammy Award winning CD "Dreams Of A World", Paul Winter’s Grammy nominated "Earth, Voice Of A Planet", Barbosa-Lima’s "Music Of The Americas" and "Ginastera" and Daniel Wolff’s "Concerto `a Brasileira". His hit-song “Meu Boi-Bumbá” is included on "A Trip To Brazil II", produced by Arnaldo DeSouteiro (JSR), featuring Tom Jobim, Luiz Bonfá, Milton Nascimento, Gilberto Gil, João Gilberto, and others. In another compilation by Mr. DeSouteiro, "Friends of Brazil", includes “Macumba Chant”, written originally for a Broadway show based on the life of Carmen Miranda. He also appears as a special guest on the late Susannah McCorkle’s last CD "Hearts And Minds".

New releases with his band AMAZON include "Sweet Brasil", "The Right Move", "The Night The Moon Cried" and "Amor Sem Fim". Besides that, his new CD "The Essential Thiago de Mello", produced by Arnaldo DeSouteiro for his Jazz Station Records (JSR) have been released in Japan, by Bomba Records.

It is interesting to notice the variety of styles which characterize Thiago de Mello's compositions. They have been recorded in three different albums nominated for a Grammy Award in three (3) different categories: NEW AGE on Paul Winter's "EARTH-VOICE OF A PLANET"; CLASSICAL CROSSOVER in collaboration with Sharon Isbin's "JOURNEY TO THE AMAZON" and CLASSICAL on Sharon Isbin's Grammy winner "DREAMS OF A WORLD".

Thiago had performed before at the Teatro Amazonas in several occasions: a solo presentation; a duo, with Carlos Barbosa Lima, and with his band AMAZON for the opening of the Earth Summit - ECO 92, sponsored by UNESCO, featuring Richard Kimball, Paul Winter, the late John Denver and UNICEF's representative, the actor George Moore - the 007 Agent, as the Master of Ceremonies.

Thiago de Mello's compositions have been featured in films and documentaries, including "Mariposa Canyon", by Benjamin Lobato; "Cero Hora-Nicaragua", and "Who Will Help Little Paulo?", produced by Chain Litewski, for the United Nations and UNICEF respectively; "A Prairie Boys Winter", by William Kurelak, Random House; "A Festa de Margarette", by Renato Falcão - Havana Filme Festival N.Y.

Thiago has also written music for theater. "Growing Up Gothic", "The Well Of Living Waters", both by Clare Coss, "From Martí to Pietri", INTAR, "Exit The King", by Ionesco, "The Visit", by Frederic Duerrematt. He also wrote music for dance as well. "Dancing", for dancer/choreographer Sara Rudner and "Recurrent Insomnia's", for a production at the YMWHA’s Dance Center in NYC.

Thiago’s jazz compositions have also been recorded by Paquito d'Rivera, Claudio Roditi, Richard Kimball, Hendrik Meurkens, and others. For many years he has been an active member of the Jazz Advisory Committee (Musicians Union, Local 802); a member of the American Federation of Musicians; a voting member of NARAS, (National Academy of Recording Arts & Sciences), N.Y.-Chapter; LARAS (Latin Academy of Arts & Sciences) and others institutions.

Thiago has just returned from Brazil, where he taught "The Art of Making and Playing Organic Percussion", at the 26th International Summer Course (CIV), in Brasília. This is the fourth time Thiago de Mello has been invited to participate in this prestigious annual event at Escola de Música de Brasília, sponsored by that city's Department of Culture. Thiago has also taught "The Art of Songwrting" previously.

In both live concerts and studio recordings Thiago has always tried to bring together the classical and the popular, demonstrating through his compositions that there is a profound common denominator among them.

*Note: caboclo is a descendant of Portuguese and Native Indians in the Amazon.

This biography is also available in Portuguese for viewing or for download in Adobe Acrobat PDF format. 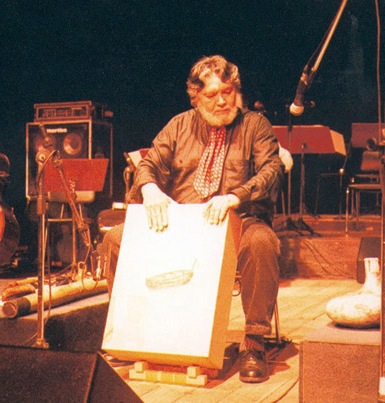 Organic Percussion from the Brazilian Amazon

“Thiago creates new dimensions of rhythm, color and nuance. His wizardry at the helm of such exotic instruments as the rain stick, berimbau, jungle's mouth and tortoise shell evoked the spirit and image of the rain forest itself.”

"... Thiago de Mello is a genius of percussion."

"On a range of instruments, Thiago de Mello produced extraordinary sounds. He's one of those percussionists who constantly play melody; he shapes rhythms with the sensibility of a poet, coloring like an instrumentalist, phrasing like a singer." 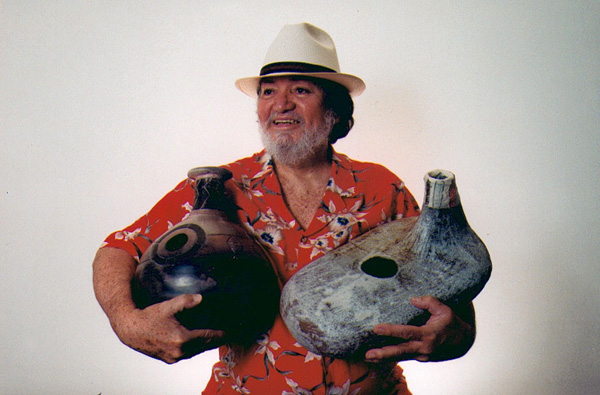